Karickhoff Named 2018 Legislator of the Year by Indiana Bankers 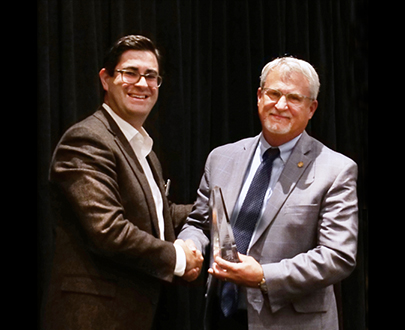 State Rep. Michael Karickhoff, R-Kokomo, has been named 2018 Legislator of the Year by the Indiana Bankers Association (IBA). He was presented with the award on Sept. 10 at the Association’s annual convention in French Lick. Karickhoff was recognized for his skillful bipartisan consensus-building, combined with a keen understanding of fiscal issues critical to the economic wellbeing of Hoosiers.

Within the Indiana House of Representatives, Rep. Karickhoff represents District 30, which includes portions of Grant and Howard counties, and he also serves as deputy speaker pro tempore of the House. His committee involvement spans the Natural Resources Committee, the Select Committee on Government Reduction, and the Ways and Means Committee, for which he chairs the Budget Subcommittee. Additionally, Karickhoff is past chair of the Indiana Advisory Commission on Intergovernmental Relations.

Since taking office in 2010, Karickhoff has achieved recognition for his ability to build relationships and bridge differences across boundaries for the greater good of creating sound public policy. He is also respected as a voice of reason among state fiscal leaders due to depth of knowledge developed through years of budgetary and economic experience while serving on the Kokomo Common Council.

In the private sector, Karickhoff is the executive director of facilities at Ivy Tech Community College, serving Kokomo, Logansport, Peru and Rochester. Previously he served as the superintendent of parks in Kokomo. Karickhoff has been active in the community through service with the Kokomo Common Council, Greater Kokomo Economic Development Alliance, Kokomo Howard Development Corp., Kokomo Kiwanis Club and Kiwanis Foundation, United Way of Howard County, American Red Cross and Kokomo Y’s Men’s Club. He also has been a long-time middle school basketball coach for local school corporations.

Karickhoff has garnered several legislative awards, including recognitions from the Indiana Association of Cities and Towns, Indiana Parks and Recreation Association, Indiana Conservation Alliance and Indiana Association of Rehabilitation Facilities.  A graduate of the University of Missouri, he was honored in 2016 as a Sagamore of the Wabash by former Gov. Mike Pence.

Dax Denton, IBA senior vice president of government relations, said: “Rep. Mike Karickhoff represents the blend of skills that defines the best of public servants. Hoosiers are well served by his dedication, integrity and leadership as he strives to, in his own words, ‘keep Indiana moving forward.’ The Indiana Bankers Association is privileged to name Rep. Karickhoff as the 2018 IBA Legislator of the Year.”

“Receiving this recognition by the Indiana Bankers Association is an honor. For years, the IBA has been a leader in supporting local communities and entrepreneurs. Banking plays an important role in maintaining a business-friendly environment for Hoosier job creators to succeed,” Karickhoff said.